The page you are viewing is developed and maintained by Mutian Wang. Back in 2012, my university roommate Ye told me that he was going to buy a second level domain, based on which we could have our third level domain individually. The SLD turns out ot be 10ss.me and the TLD for me is m.10ss.me, this site exactly.

Although a TLD is attained, nothing will work unless you write a website. Build a site through WordPress seems to be attractive and is quite convenient, however, for me it is nothign but a blog like QQ Zone. As a result, in March 2014, the structure of this site was built up. Then in the following weeks almost everything was done. On May 6th, my 21th birthday, the whole site was rolled out.

The site rolled out on May 6th, my 21th birthday.

After telling the story about how this site was built, I think it is time to say why it was built. Since apps like Weichat and Facebook became the dominator of the Internet, blogs fade away bit by bit. Actually most of us do not have time to write an article contains more than 100 words. We feel satisfied after posting 2 or 3 photos and forwarding 2 or 3 tweets. But when look back, nothing but trivial thins were recorded everyday. The resaon is simple, all we released on those platforms are showed up for others but ourselves, and how many value do they left for us?

One of my roommate of my freshman year has a good habit, that is writing blogs on QQ Zone every week, and he keeps the habbit for four years. I developed the same habit sine me juior year, but the blogs had not been updated since the beginning of this semester. The fact is that I have been planning for this site since then and the plan causes the delay. As for the reason of build a site rather than use blogs on other platforms, the answer is, it feels like take notes when use blogs from others, but it feels like writing a book when things are done on you own webpage.

Of course the site is on early stage so bugs exist inevitably. Hope you don't mind it. Best wishes. 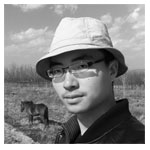 32 Responses to "The Homepage Rolled Out"

Radicals in their time, early Impressionists violated the rules of academic painting. They constructed their pictures from freely brushed colours that took precedence over lines and contours.